PHOTONS OF LIGHT STUFF AND ELECTRIC CHARGE STUFF ARE MADE FROM 3D ENERGY. PART 4x


The electromagnetic stuff that exists inside atoms of material is made up of magnoflux energy. There is nothing else inside a molecule but this electro-magnetic stuff. Further, the shape of the air gases molecular shells cannot be spherical as the molecules must fit together exactly without leaving any vacuum gaps [see part 2]. Not only is matter made up of this 3D energy stuff but also creational light. [ see 3D magnoflux holy grail youtube presentation]https://www.youtube.com/watch?v=_jRRG1ESXvQ

A photon of light should be envisaged as a unit pyramid shaped volume of magnoflux [stuff] energy which pinches together with other photons and tumbles forward sinusoidally. Photons in space move in pairs, as although they both contain a unit of magnoflux energy; the far end always appears out of phase magnetically to the other half, as the field reverses inside out every other cycle. So it takes 4 pi [∏] to complete a cycle instead of 2 pi [∏] for a standard Sin wave. This agrees with the fifth Feydman diagram that shows a photon splitting into an electron and positron pair. The virtual positron once released immediately annihilates a magnetic electron releasing the energy as heat. A light ray cannot be deflected electrically because of the continual double helix reversing of the pairs [ forming a magnoflux micro tunnel], it just vibrates a little but continues in the same Z direction through the magnetized fabric of space. 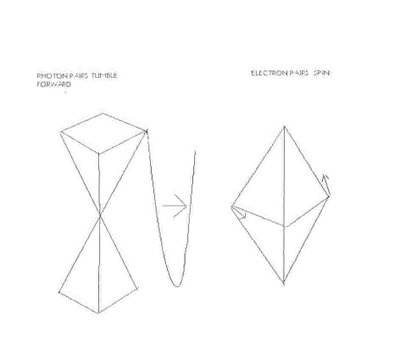 Electrons are similar in shape to Photons but in photons the top tips of the pyramid pair together whereas in molecular electron enclosures the bases pair together. See above diagram. Photons remain in pairs in space and do not dilute in accordance with the inverse square law; but continue to move in their preset Z direction, maintaining their set volume of pyramid shaped magnoflux energy. Both free AC magnetic electrons and photons can move at the speed of light through a magnetised space but once a DC electron becomes attached to a negative neutron [matter stuff] to form part of its enclosure it is limited to the speed of that neutron or proton pair.

Quantum Field Theory and Quantum Electro-dynamics have for sometime been investigating the exchange of energy from magnetic electrons to photons and back to electrons and have detailed the experimental evidence in articles on electron-photon renormalization. These articles confirm that the light (or magnoflux) energy is able to pair in two different ways either tumbling forward or forming a spinning electron enclosure. In fact AC electricity is more akin to magnetic photons moving through the spare holes in the electron shell than DC electron particles moving.

The double slit experiment was originally performed on light by Young in 1805 but Hitachi engineers have repeated the experiment recently with both free electron pairs and a nuclei inside an electron enclosure and obtained the same interference fringes. This is yet another indicator that both light and electrons contain two halves of a pair, allowing half of the pair to go through the other slit thus confirming the similarities between the magnetic electron and photon pairs.