DARK MAGNETIC FORCE AT GALACTIC HUBS SUPER MASSIVE BLACKHOLE CENTRE; SPIN STARS AND REPEL OTHER BLACK HOLES. Part7
In order for galaxies to exist without collisions it is necessary for the stars in each galaxy to all rotate together. This means that each star in the galaxy must be aware through the magnoflux aether in space of where the other stars are. . Hubble detailed several typical shapes of galaxies as discs, spiral, bar-spirals and conical, but failed to explain how they all appear to spin together. Their movement could however be modelled using magnets in a plasma field.
Despite this obvious magnetic connection cosmologists preferred to believe that stars were just rotated by chance at creation; as spin is not a gravity related force. A massive gamma ray burst in 1979 baffled scientists until it was finally traced to a magnetar which exploded magnetically without the assistance of gravity. Considerable work has now been commenced on magnetic surveys of some galaxies using the Faraday rotation techniques, that positively identify these magnetic fields in space.
By failing to accept in 1956 that there are electromagnetic forces in space a further complication soon arose; in the form of super massive black holes that appeared at the centre of galaxies which gravitationalists declared to have almost infinite gravity that lead through worm holes to the outside of a parallel universe. Anything including light apparently, that crosses inside these black holes event horizons; physicists then fantasized, got sucked inside and absorbed into nothingness.

Sounds unlikely; well, there is an alternative electric view that considers that gravity is not the only force in space and conceives a super massive black hole as an induced magnetic hub at the centre of a galaxy. This hub may show all the signs of being massive but contain no matter at all. Due to the intense magnetic field at the galactic centre, any particles that get inside the magnetic hub will be rotated in a clockwise direction until their speed is such as to be ejected at high energy; even as gamma radiation.
NOTE. This type of magnetic hub or super massive black hole had not been reliably identified at the time of the Copenhagen convention, and is entirely different from the collapsing star black hole detailed in some text books, which is tiny in comparison.


The size of the induced black magnetic hole appears to be related to the overall mass of the galaxy in which it is centrally positioned and has an equivalent volume set by the Creator in such a way that the surrounding interspace density of matter will be around 4 molecules per cubic metre. This results in the microwave background noise and temperature being nearly constant throughout the universe.
To balance the standard model of the universe, it is necessary to accept that there is a dark magnoflux force of repulsion of around 20G between the galactic magnetic hubs [super massive black holes] if the wmap results confirm that 90% to 95% of the observed mass of the universe appears to be missing.
In terms of the alternative electric universe this would mean that the stars are not only electro statically aware of each other but electromagnetically bonded to a common induced central magnetic hub which physicists have discovered and named a super massive black hole. Predicatively then, every galaxy will be found to have a magnetic hub at its centre.
NOTE: It is this EMF electromagnetic dark curling force which is responsible for the expansion of the universe. The apparent red shift of galaxies at the edge of the universe could also be affected by the intervening black holes as light will need to deviate around the magnetic hubs making the path from source to target inside the magnoflux tunnel longer.

The deeper we delve into the smallest atom, the more we discover that all energy movements are associated with electrical charges immersed within a magnetic-flux field(electron) enclosure whose origins can be traced to the primordial flux plasma that was created by God at the beginning of the universe.
This led engineers/physicists to believe that molecules of a conductor such as copper on aluminium are made up of components that already have electrically charged particles that can assist in conducting electricity. Well, that will work quite well with DC in electrolysis and we know from cathode ray tubes that electrons can be accelerated across the vacuum gap between the negative emitter and anodes by a DC voltage with ease.
However, electricity moves at [or near] the speed of light a feat that DC electron mass particles cannot achieve without almost infinite energy if Einstein is correct. We know that a cable under the Atlantic can carry a signal at nearly the speed of light with very little loss of energy so the signal pulses must be in the magnetic flux field; as it can have nothing to do with electron particles. So how shall we explain AC electricity; that can not only flow along conductors but also vibrate through a fully primary to secondary isolation transformer core? We need an alternative model! Let us objectively consider a transformer and induction motor from the magnetic flux point of view.

Current wisdom for transformers considers that in AC the ampere-turns set up a flux in a two dimensional wave in the primary winding which vibrates the core magnetic domain molecules which then vibrate through the core and re-invert the electrons on the secondary side and thus the energy gets transferred
Well, that works mathematically but only uses 2 electro-magnetic dimensions instead of the 3 dimensions we suspect are present in reality. By experimenting using a compass around the core to plot the magnetic field around a core of a transformer or motor we find the compass is deflected in all sorts of directions and dips showing that the energy field is in fact three dimensional and not just two. [ See 3D magnoflux holistic theory of electricity on youtube presentation]
https://www.youtube.com/watch?v=_jRRG1ESXvQ
If we now consider the above locked rotor motor we can see that this is identical to the transformer although we would normally let the secondary winding spin; but the primary electromagnetic flux energy volume is the same whether it is used to energize a motor or a transformer.
Thus a three dimensional magnoflux field is required to support volumes of AC energy rather than by the two dimension electric volt and amp vectors used at present. As we know that voltage strength is measured per metre; so then the current must be complex and be 2 dimensional measured per square metre of loop area.
So we can use the right hand screw fingers rule used in generators and motors to envisage that the transformer also has a complex magnetic current area loop field which is at right angles to [but not opposite] to the voltage field.
Remember, the actual mechanical energy transfer is made in the motors airgap between the stator and rotor poles and the forces are purely magnetic. [we cant have a wooden rotor]
Faradays law of induction indicated that the electromagnetic motive force or EMF is proportional to the rate of change of flux at right angles BUT it also curls the magnoflux around into a volume of massless energy.
This new magnoflux concept leads to understanding that complex current [I] is an area of magnetic current loop. We need to envisage this magnetic current area as being comprised of inductive magnetic excitation current in the x direction and a set conductor capacitive charge parameter current in the y direction.
So complex current is equal to the square root of the product of the two parts of current Ix and Iy. If this current area is then made to move by applying a voltage in the z direction we shall then have a 3D volume of magnoflux energy in joules/second per cubic metre or EM massless energy with a characteristic electromagnetic spectrum energy density.
See attach diagram 3dloopforward.jpeg below 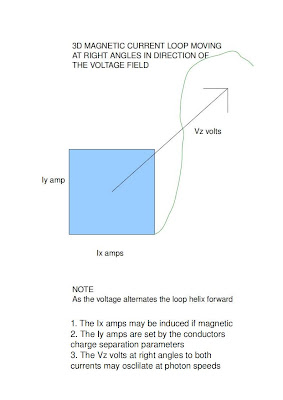 The only remaining problem to address is that of imaginary reactive power normally measured in power plants in var's. Well, it turns out that for real energy or power we need an equal amount of inductive excitation current and capacitive conductor parameter current at right angles to each other. So if an AC current of say 4 amps is made up of 4 amps inductive and 4 amps capacitive then the square root of the current area is 4 amps real which if attracted forward by a positive voltage at right angles will represent real energy. If current area is rectangular then only the root of the square of the minimum side will be real energy the remainder being imaginary power.
See diagram magampsarea.jpeg below 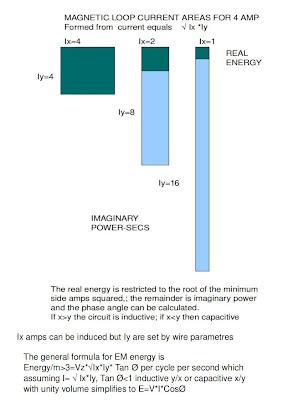 To conclude, 3D magnoflux energy can be measured by the electromagnetic density/volume formula E/m 3 = root IxjIy*j 2Vz*Tan 45 degrees in Joules per second or Watts per cubic metre, at a precise position x,y,z in space.
This formula can be simplified to E=V*I*Cos 0 on the assumption that current I is numeric only and Tan45 < 1 = cos 0