3D magnoflux model of magnetised space vacuum radiation energy in light & in molecules Part 9     C. Stevens ©
Basically, it will be necessary to rethink cosmology and make the assumption that the inside of the universe is magnetised and therefore exists.  We may not be able to measure the magnetic fields directly but we can look positively for evidence of their presence in galaxies, solar systems and even molecules. as the 3D magnetism permeates everything everywhere throughout the universe
This means the MKS system of SI standard international units is incomplete as it ignores magnetism and only describes physical planetary energy as a secondary effect of M.L.2 /T2 which is totally misleading as far as magnetic star light in space and AC electricity are concerned.
Magnetised space is a massless vacuum volume which may contain an area of magnetic flux current or plasma pulsing forward through that magnetised vacuum and must not be confused with blackbody physical heat or electron particle radiation in Joules which radiates in all directions and is untargeted.

Light is AC magnetic radiation which is not isotropic kinetic radiation but can be targeted through the magnetised vacuum volume of space or indeed in the space inside a humble water molecules electron enclosure.

The problem of not understanding electricity starts with Faraday Right hand  and Maxwell corkscrew rules.  We should have deduced earlier that a loop of current will induce an area x,y of magnetic flux field which moves forward at right angles along an EMF voltage line z to generate magnetic energy.
Maxwells equations further confused people;  as they did not define the 3D directions of the flux or voltage       Wikipedia however, correctly states the following on “Faraday’s law of induction”

“The Maxwell–Faraday equation is a generalisation of Faraday's law that states that a time-varying magnetic field is always accompanied by a spatially-varying, non-conservative electric field, and vice-versa.

A Wikipedia illustration of Kelvin-Stokes theorem with surface Σ its boundary ∂Σ and orientation n set by the right-hand rule.”
This equation based on the generalisation of Faraday's law which if rewritten states that
Curl[V]dL=-NdB/dt*dA
Where V is electromagnetic curl force in volts,
dL is length of magnetized airgap per revolution,
N is number of turns and/or frequency ,
dB is flux changing per rev in Webers/m 2
dt is time in seconds
dA is area of flux-amps in the x*y real and virtual coordinate directions

When considering the above equation it is important to realize that energy=force*distance; so if the electric force [EMF] in space V volts are multiplied by a loop distance dL at right angles then a new 3D space radiation volume formula for magnetic energy in Wattsecs will emerge. Because magnets always loop completely; then one side of the equation is in real space energy units which are balanced and equal to the virtual units on the other side of the equation and note there is no mention of mass or matter in either side of the equation. Thus it can take zero energy to magnetise the space vacuum if we subtract the virtual from the real component and helix the flux area forward sinusoidally. To demonstrate the ability of a magnet to spin ions in a salt solution a YouTube experiment originally performed by magnet-flipper is attached https://www.youtube.com/watch?v=dllAJzPI0LY    Please study this effect carefully as on a macro scale it could explain galaxy spin 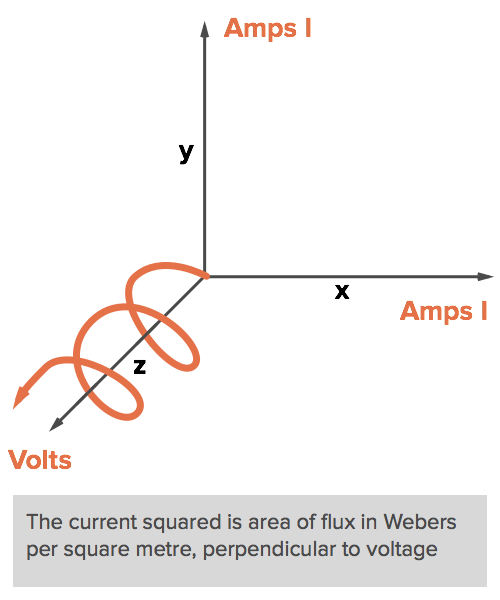 This new space energy is a volume of 3D magnoflux magnetic energy and can be measured in Wattsec per cubic metre.  The current area is produced by the capacitive and inductive currents at right angles to each other.  If these currents are not equal then a phase angle Ф will appear which will reduce the real energy and some virtual reactive VAR’s will be produced once an electro-magnetic curling force in volts is applied at right angles to that flux area. This will leave only the inherent resistivity of conductive matter to impede the flux motion of a current flow.
So by using this new interpretation of Maxwells equations we can see that the magnetic space energy is not electron magnetic at all but just magnetic and if perfectly balanced in a vacuum is lossless which makes it difficult to detect as there are no reference points to measure from.

DC electrostatics require charged electrons or particles to transfer energy, but AC transfer is possible if the movement of 3D magnoflux magnetic energy is made on two conductors that are fully magnetically saturated as no electron movements through zero is required only the ampturn flux need move.

Looking at the diagram the load current is added or subtracted from the ampturns readings but is not sufficient to reverse them into the losses area in the graph.  In practical electricity terms this means the inductive and charging current losses remain the same at both the no load and full load conditions thus only resistive losses will occur.
Further, it is possible to maybe balanced magnoflux energy by depicting it as E=½*C*V 2  +/-1/2*L*I 2    where in the case of DC the capacitive component is real and inductive is virtual but equal in magnitude so will sum to  zero if no rectification is used

New magnoflux vacuum energy is 3 dimensional and fundamental to all magnetised space volumes throughout the galaxies and also inside the magnetised space inside molecules.  It is entirely different from planetary classical scalar directional energy and leads to a new independent energy unit

So the new fundamental energy units of flux= ICosØ and Volts need to be added to MKS system to complete the new V*IcosΦ*M*K*S system of SI units as this will affect the way we model the coordinates between the black hole in SagA* which is our magnetised galactic hub from which all measurement of the star positions in the intergalactic space between must be referred. See part 8

The two main lines of thought on this problem are both incorrect as electromagnetic light is massless and therefore not a particle and it is also not a 2 dimensional wave but is a 3D magnetic space energy volume phenomena.
The diagram shows the real [N] north and virtual [S] pyramid shaped components of magnetic light dipole helixing forward due to a voltage attractive force or EMF in direction of the arrow.

+XYreal-gap-XYvirtual-gap-+YXreal-gap-YXvirtual-gap-                  etc
Where Xr is real flux in x direction (moving top to bottom), Xv is virtual flux in x direction, Yr is real flux in y direction and Yv virtual flux in y direction ( but moving bottom to top).  The fluxes going through the righthand slit are exactly opposite in phase and magnitude to those in the lefthand slit so at all positions the double pyramid which twists at its central point is balanced.
Everything balances magnetically as the real flux rotates clock and virtual anticlock so is unaffected by external voltage or magnetic fields.
It takes 2 cycles [or 4π ] to complete a single rotation of each of the magnets.
As far as the double slit experiment is concerned the slits are only in use when the double pyramid is horizontal and dark when the pyramids tumble forward vertically and hence the interference pattern is formed as witnessed in the double slit experiment

How does a photon of magnetic energy get absorbed in a molecule
The classical approach to a molecule is to consider it as having a nucleus of protons and neutrons particles encircled by spinning electron particles.  However, we know that the only stuff inside the matter molecule is electric charges and that most molecules have a magnetic dipole moment.  The new physics contention is that this inside volume of molecular stuff is made from 3D magnoflux energy  and further the more violently the magnoflux vibrates the hotter the exterior temperature of the molecule.
We know that our atmosphere is comprised of gases and these molecules must be pushed together with no gaps in between.  The spherical shape we presently assume cannot reasonable be correct as there will be gaps and anyway the periodic table prefers to have 8 sides to bond.
A new physics model based on double pyramid shape volume is proposed

The equilateral triangular shaped sides can fit together exactly to link diamagnetically plus there will be less gaps between molecules.  The table of isotopes nuclear moments indicates that most molecules are magnetic dipoles. The only exception to these molecules that can just blow in the external magnetic wind are those that have a full quadrapole moment which means the molecule contains a volume of pre-orientated magnetic energy which will result in domain hysteresis losses if changed.

The diagram shows at the bottom that the negative electron pyramid enclosure shell is connected internally to the neutron bundle.  Note that as the external of the enclosures are all touching other molecules that the overall voltage of the earth its solids ,liquids and its atmospheric gases will all be at full negative electron potential.  What we touch and feel is neutral as far as we are concerned and we do not get a shock as we are made of molecules that are fully negative as well.. This is confirmed by the fact that the neutron has a magnetic moment.
When extra energy is pushed into the molecular pyramid the internal magnet will vibrate more strongly and we will sense this as an increase in temperature.

As the inside of the molecule must balance perfectly magnetically a strong nuclear force of 10 38 G will be needed to force the like charges in the proton bundles together. Same force applies to the neutron bundle as well.  The proton bundle must be pushed away from the neutron negative bundle by a electro-magnetic EMF curling force of 10 36 G which also pushes away the electron enclosure sides of the pyramid.  As the normal repulsion of same charges force is weaker at 10 25 G ; this pushes the oxygen proton bundle away from the magnetically dominant hydrogen bundle thus the molecule is stable.  The gravitation attraction of just one G is insignificant and the resulting internal 3D magnoflux space energy force field is massless

Standard International system needs to be revised to V*IcosΦ*M*K*S as this will balance the universe and molecular stuff.
Posted by electricmagnofluxuniverse at 3:33 AM No comments: